In Rieti walking with St. Francis

Although a little ‘blurred by the lights of the capital and the green hills of Umbria, Rieti protects with pride his Umbilicus Italiae with the medieval walls surrounding the old village. It is hidden from view and the clamor, as well as its amazing underground cable, made of canals and navigable once witnessed a rich […]

In Rieti walking with St. Francis

Although a little ‘blurred by the lights of the capital and the green hills of Umbria, Rieti protects with pride his Umbilicus Italiae with the medieval walls surrounding the old village. It is hidden from view and the clamor, as well as its amazing underground cable, made of canals and navigable once witnessed a rich water that quenches even Rome.

The old port and unsuspected reatino opened the Velino river, along which the city still faces. On the bridge that crosses it, near the ruins of stone predecessor of the Roman era, a design in yellow paint on the pavement indicates the way for hikers and pilgrims depart from the city center along the Sacred Valley of Rieti, sister of the more famous Italian Camino de Santiago.

Still unknown to mass tourism, the wedge between the hills and mountains Reatini Sabini is a succession of green interrupted by lakes and cultivated fields. Every once in a cluster of houses in stone marks a peak and stops the way to the steps of Saint Francis Walk (www.camminodifrancesco.it), a ring of 80 kilometers, between woods and hills, combines the four shrines associated with the patron saint of ‘Italy. 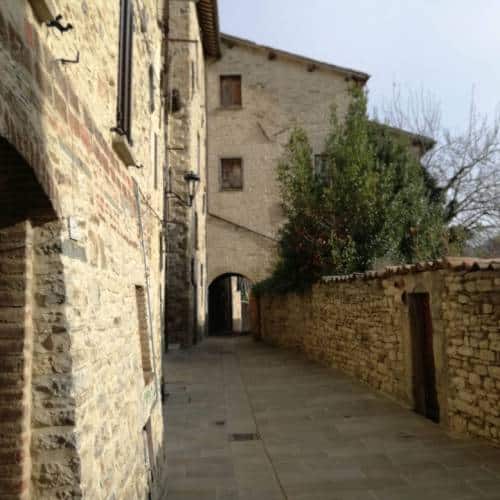 When he came here over eight centuries ago, St. Francis was the only son of a wealthy merchant of Assisi in search of himself, with aspirations as a knight and an innate sense of revolt. In places that today bear the traces of his memory he found answers, he changed his life, he walked, he convinced and started the long journey to the end of which he became a saint.

On the streets privileged geographic location (and therefore in the past crossroads of the paths of faith from various parts of Europe came to Rome) today walking backpack, water, food and “pilgrim’s kit” in hand, with map paths and guide structures, provided by the Tourist Promotion (www.apt.rieti.it). On-site retreats instead the Pilgrim Passport, to show off and be stamped in each of the four shrines in order to get then, by the office of tourism, ” attestation of the pilgrim. ” To complete the route just a couple of days to be spent on foot, horseback, mountain bike or by car.

The journey begins in Rieti, in front of the basilica of Santa Maria, where the statue of St. Francis is the best encouragement for adventure. The route of Via Roma, today ‘rub’ favorite for shopping of Rieti, leads to the Roman bridge and from there out of town along the river Velino. Stick in hand, you can clamber municipal roads and trails and an hour later you get to Fontecolombo, called the “Franciscan Sinai” because here was written rule of the new Order.

A look at the valley from the top of Colle Mail and we will depart Contigliano, charming medieval village from where you continue to Greccio, the “Bethlehem Rieti,” guardian of the Grotto of the Nativity, which recounts the birth of the first crib. If from a distance looks fused with the rock on which it is built, from the sanctuary of Greccio, the best known in the area, offering a panorama that stretches from mountain ridges to the plain around the lakes and along Ripasottile witnesses to the water wealth of this valley.

The path through through the Nature Reserve that surrounds and separates the two lakes Greccio from Poggio Bustone, clinging to a cliff not far from the place called Bandita, where a road shaded by large oak door to the sanctuary isolated from the town.

St. Francis we do not want, but maybe Poggio Bustone more than for the sanctuary is known for being the place where was born March 5, 1943 Lucio Battisti. In fact, the climb to the village begins with the Giardini di Marzo, named after one of his popular success, where famous people live depicted in two statues: Lucio tightening her arms around his guitar, Francis, who holds them open as if to embrace the ‘ universe.

Closed parenthesis profane, it continues on its way through the narrow streets of the village that climb up to a small clearing on the hill, where silence seems broken only by the chirping of birds. Near the shrine of St. James – wood and stone porch, nave – a mule track from scented gorse bushes and wild thyme leading to Sacro Speco, picturesque place of the revelations of the cave where Francis became isolated and they conceived the embryo of the Franciscan.

The pastures of the surroundings lead to beech woods among which is the tangle of nodes and branches of the tree which, according to popular legend, it is folded back on itself to protect San Francisco during a terrible storm.

A few more kilometers of travel leading to the final stage of the Way, the sanctuary of the Forest. Standing on the hills overlooking the valley of the River Water Marina in the woods of chestnut and oak where he spent the ancient Salt Road, is preceded by the geometry of a pretty garden with shades of colors that change with the seasons. Show the love for the nature of the community, a witness of the same love that Francis preached tirelessly.